Not only on the course but also on the pit road (pit lane), there are various regulations related to speed limit, pit work, pit in and pit out etc. For example, the pit road speed limit is determined maximum 60km/h. 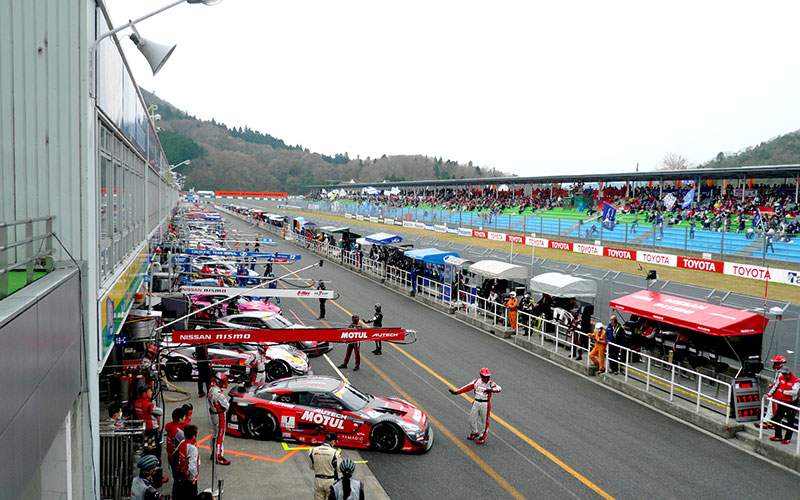 Work area is a place where car changes tires or refuels during the race, and set in the front of the pit assigned to each car.

Fast lane is the place where the cars run on the pit road. Even if it conducts the pit stop, it must drive on the fast lane until close own work area as possible. When driving on a pit road, it must follow the speed limit.

Sign area is the place between the fast lane and the course, where the team crew displays the signboard to inform the driver of the timing of the pit stop or the time gap with rivals. In the top category races, the team manager and race engineer wait at the sign area and give instructions to the team crew and driver.

At the start of the race, it likely to occur the accident, so entering the sign area is prohibited.

2.3.1 Speed limit
In all international circuit competitions excepting the Formula 1 World Championship and on oval circuits, cars using the pit lane, in practice or racing, should not exceed 60 kph: this must be applied and checked over the whole length of the pit lane.

22.10 A speed limit of 80km/h will be imposed in the pit lane during the whole Event. However, this limit may be amended by the Race Director following a recommendation from the FIA F1 safety delegate.

Any team whose driver exceeds the limit during any practice session will be fined €100 for each km/h above the limit, up to a maximum of €1000.

However, in accordance with Article 18.1 the stewards may inflict an additional penalty if they suspect a driver was speeding in order to gain any sort of advantage.

During the race the stewards may impose either of the penalties under Article 38.3a), b), c) or d) on any driver who exceeds the limit.

Using the reverse gear is prohibited.

It is prohibited using reverse gear on the pit road. If it wants to retreat the car, the pit crew push the car by hand.

In 2016 Formula 1 United States Grand Prix, Kimi Raikkonen stopped at the pit road exit due to the mechanical trouble, the place where it stopped was an uphill. He shifted the gear to neutral, and the car retreated by inertia and returned to the pit road. He did not use reverse gear, it was not treated as the violation.

On circuits that a white line is drawn at the pit road entry, crossing this white line to entry the pit is prohibited. It is permissible for tires to step on the white line, but crossing the line with one tire completely, it may be imposed the penalty.

4. Entrance to the pit lane

d) Except in cases of force majeure (accepted as such by the Stewards), the crossing, in any direction, of the line separating the pit entry and the track by a car entering the pit lane is prohibited.

As with the pit in, on circuits that a white line is drawn at the pit road exit, crossing this white line after pit out is prohibited.

5. Exit from the pit lane

Joining after pit out

Cars immediately after pit out must not obstruct the driving of other cars on the course. In some cases, it may prohibit making sudden direction change after pit out by supplementary regulations of the circuit.

The number of pit crew limit

If it limits the number of pit crew, it is described in the supplementary regulations.

In the pit road, cars running on the fast lane have priority. If there is a car on the near fast lane, the car stopping at the pit cannot start.

If a car is launched from the pit even though there is a car in the near fast lane, it may be imposed the penalty as an unsafe release.

28.13
a) Cars must not be released from a garage or pit stop position in way that could endanger pit lane personnel or another driver.

Competitors must provide a means of clearly establishing, when being viewed from both above and in the front of the car, when a car was released.

b) If a car is deemed to have been released in an unsafe condition during any practice session, the stewards may drop the driver such number of grid positions as they consider appropriate.

d) An additional penalty will be imposed on any driver who, in the opinion of the stewards, continues to drive a car knowing it to have been released in an unsafe condition.

In all of the above cases, a car will be deemed to have been released either when it has been driven out of its designated garage area (when leaving from the garage) or after it has completely cleared its pit stop position following a pit stop.

During the pit stop, there are also regulations for the work conducted by the team’s pit crew. The content varies from series to series.